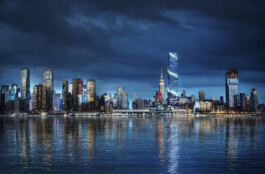 The Spiral highrise by BIG in New York

In New York City, the highrise building The Spiral designed by BIG for Tishman Speyer has more and more taken shape. While construction still proceeds, with a completion date in 2022, the overall silhouette has become visible. When finished, the building will feature workspaces of different sizes in a volume which reaches its highest point at a bit more than 1000 ft, equalling 306 meters. The most dominant element, however, will not be its size, but a spiralling green pathway which leads up the building, forming terraces and outer spaces on the different levels. 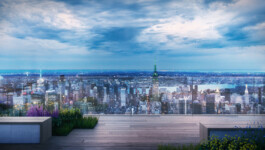 Located at the intersection of the High Line, the horizontal park which has become an iconic green space in New York City, and the newly developed Hudson Boulevard Park, the architecture extends the green space of the former train tracks in a spiraling motion towards the sky – "from," as the architects put it, "High Line to skyline." Inside, every terrace becomes a double height atrium with views over Manhattan. These spaces connect multiple levels in the building, offering, say the architects, an alternative to elevators to encourage physical activity and interaction among colleagues.

With the spiral path wrapping around the building, the tower becomes gradually slimmer towards the top. It thus echoes the historical typology of skyscrapers in New York which often followed slightly "pyramid" shapes that still define the city’s skyline. 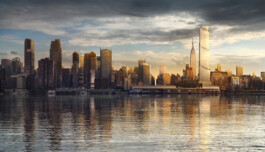