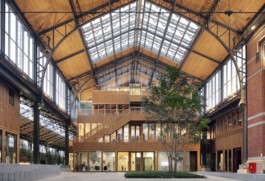 A City Where It Never Rains

The Tour and Taxis area north of Brussels’ centre has a long history. When the family Thurn and Taxis organized the European postal system from their then-homebase Brussels in the 17th century, here were the meadows where carriages could change horses. From 1900 onward, however, this became a storage and douane place, for goods that came by boat to the nearby canal harbour and were later distributed all over Europe by train (or the other way round). Among the buildings preserved from that period is the impressive Gare Maritime, once Europe’s largest railway station for goods, which has now been restored by Jan de Moffarts Architects and transformed by Neutelings Riedijk Architects into a covered city with a mixed program of working and shopping and plenty of public space to relax; ‘a city where it never rains’. It becomes the centre of a new urban area where several old buildings have been transformed lately and new ones with offices and apartments and other functions have started to rise. 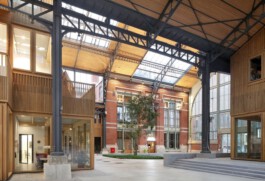 The old station from the beginning of the 20th century consists of three larger and four smaller halls. Under the existing roofs of the side aisles, twelve new pavilions have been added to accommodate the new program. They create a new structure of boulevards and street, gardens and squares, that follows the existing urban context and the building structure in a natural way. The central space in the heart of the building has been kept open for public events, with a pleasant climate and pedestrian routes which give enough room for spacious inner gardens and squares designed by artist Henri Jacobs. The new pavilions have been constructed in Cross Laminated Timber (CLT), with an enormous reduction in the amount of cement as a result. The choice for wood also had a favorable effect on the construction process: thanks to prefabrication and the dry constructing method, the construction time was considerably shorter. In addition, Gare Maritime, which is a private project by site-owning developer Extensa, is entirely energy neutral and fossil free. The glass facades on Picardstreet are provided with solar cells. On the roofs a total area of ​​17,000 m2 of solar panels has been installed. At all levels far-reaching sustainability measures have been implemented, such as use of geothermal energy and reuse of rainwater. 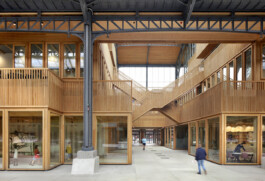 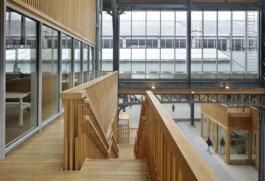 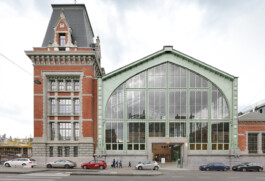