A Bridge in Paris

In the 13th arrondissement of Paris, the Le Monde Group lately moved to their new headquarters designed by Snøhetta and local architects SRA. The building offers workplaces for the 1,600 employees of the Le Monde Group, which comprises a large number of well known publications including Le Monde, Courrier International, Télérama, La Vie, and HuffPost. With a translucent, dynamic façade and an expansive public plaza, the project expressively reflects its history: as the choice for the design was made just a few days after the terrorist attacks on Charlie Hebdo Magazine’s headquarters, it deliberately aimed to express its openness to the city. 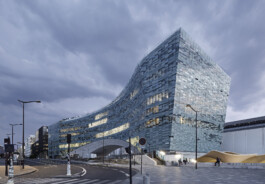 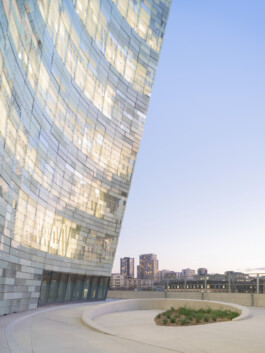 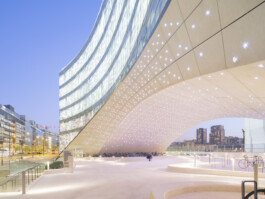 Furthermore, the specific shape of the design also had to react to constructive challenges, as the architects say: "Spanning 80 meters from one side to another, the building is a response to the conditions and challenges of the site: Acquired by the Le Monde Group in 2014, the site is situated just above the railways and platforms of the Gare d’Austerlitz which makes the creation of a technical basement impossible. The first challenge, therefore, was to construct a building where the entire technical system of the building would be cleverly incorporated into the structure of the building itself. The second challenge was that the site could only carry a specific amount of weight, and only on the two extremities of the site. As the middle section was not planned to hold the weight of a building, the client’s initial brief was to create two buildings on the parts of the site that were buildable. Snøhetta and SRA’s response to these challenges was to work on the idea of merging the two units together through a bridging structure of steel that would literally leapfrog from one side of the site to the other."

As the architects add, the connection with the city will in the near future be further enhanced by a new bridge that will be constructed across the neighboring railways of the Gare d’Austerlitz. 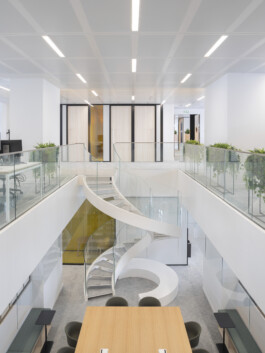 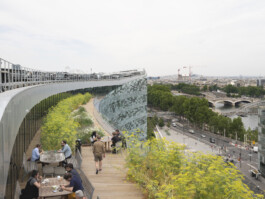